Are you a newcomer to cryptocurrency, or do you need more detailed knowledge about SafeMoon? Don’t worry; here, in this write-up, you will be able to gather all the essential information on one of the most common cryptocurrencies, SafeMoon.

SafeMoon LLC is a blockchain and cryptocurrency founded in March 2021. The headquarters are in Pleasant Grove, Utah, US, but it serves globally with its cryptocurrencies. The company also consists of an SFM, which stands for SafeMoon token, which is usually traded on the Binance bright chain blockchain. A transaction fee of approximately 10% is charged by the token, of which 5% is reflected or redistributed to the token holders, and the other 5% is directed to the coin author’s wallet in a different currency.

In May 2021, the SafeMoon token reached an all-time high market cap of $10.9b. The company has also released a cryptocurrency wallet function. It also announced the release of many other cryptocurrency products. To date, the token and the company have been the subject of controversies as multiple class-action lawsuits have been filed against them, and they are facing fraud allegations; not only this but they are compared to a ‘Ponzi scheme.’

Must Read : What is blockchain? How does it work?

Like Ethereum blockchain’s Ether and Bitcoin, it is based on the standard distributed ledger technology. Per the statement of the company’s creators, it can be found that SafeMoon has been designed to encourage long-term investment. 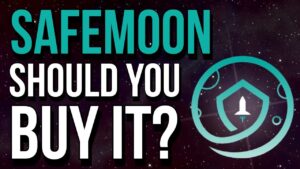 Origin and history of SafeMoon

The history of SafeMoon can be traced back to the year 2021. Six developers developed and launched SafeMoon on the Binance Smart Chain (BSC) blockchain. Do you know where the name of the company is derived from? ‘Safely to the Moon is the phrase from where the name of SafeMoon derived and came into the market on March 8. The derivation of the name implies the intention, which is not only to rise but to ride safely. According to the reports of BscScan, there are approximately 2.9 million holders of the coin to date.

Many things have been taking place in May, June, and October.

The first version of SafeMoon, between March 14 and April 21, increased in value by 23,225% because of celebrity endorsements. In May 2021, the company announced the making of a presentation to provide “technology for innovation and learning purposes” to The Gambia.

Do you know that there are two versions of SafeMoon? Yes, the one launched in March 2021, and the other one was developed in December 2021.

Also Read :  What is Blockchain? Will it change the future of money?

The second version is an updated version of SafeMoon’s first version. The team released Safemoon Swap, a decentralized exchange, as the only place where any migration can occur. Recently, in April 2022, the Safemoon card, a new product, was announced to the company. This has been promoted in the market as a debit card that you can use for paying for goods using SafeMoon for a fee of 2.5%. People have also criticized SafeMoon for letting them pay an extra amount of money for the goods. 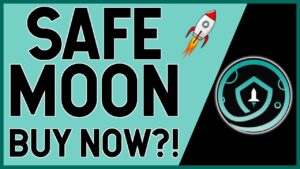 What are the features of SafeMoon?

The core features are reflection, token burn, and LP acquisition.

The project’s white paper reports that the holders of the SafeMoon are charged 5% of the transaction fee, which is distributed amongst the coin holders.

As per the white paper revealed, LP acquisition is considered to be the second core component. A 5% transaction fee is said to be issued to several liquidity pools on a platform like PancakeSwap and others. Five percent half is sent to the liquidity pools, which are converted into Binance Coin (BNB) to guarantee the liquidity of the Binance coin pair and SafeMoon.

Token burn is another prominent feature of SafeMoon. To be deflationary, it decreases the quantity of SafeMoon in circulation.

Why SafeMoon became so popular?

This newcomer to the crypto market is commonly known for its high transaction fees, tremendous volatility, and social media hype. SafeMoon received endorsements from various celebrities like Dave Portnoy (famous sports blogger), Lil Yachty (rapper), and Jake Paul (YouTuber). It’s ranking as per CoinGecko is 117th largest of all cryptocurrencies. On the other hand, the Coin market cap ranks at 218.

Like every coin has two sides. Similarly, SafeMoon has both pros and cons as well. So, let us know the advantages you can cherish if you purchase SafeMoon coins.

As the name is ‘SafeMoon,’ you never know what magic can take place in the coming years. It is a meme coin with a lot of potentials to go viral, and you are well aware that if this meme coin goes viral, its value can also shoot up. Let us take the example of Dogecoin; because of word of mouth, in 2021, its value increased by more than 200 times. If you are a person who is looking for a long-term investment, then investing in SafeMoon is beneficial. Another recent benefit for investors like you is that the transaction fees of SafeMoon 2.0 have been lowered.

While if you have been into cryptocurrencies, you might know these are highly speculative assets with no inherent value. Similarly, there is much other stuff that you should be aware of before purchasing them.

Volatility: If you observe, you might see the highly erratic price of SafeMoon since its launch. There is no intrinsic worth of cryptocurrency coins; your profit depends on what you have paid and how much you sell those coins.

Regulation: Currently, the government is learning about cryptocurrency coins and their potential as they are very new. So, proper regulation must be developed for such things as charging higher taxes on crypto profits. Sometime back, China banned crypto trading because they thought that it might cause danger to one’s financial status.

Liquidity: SafeMoon is usually traded on PancakeSwap and Binance; various other cryptocurrencies are sold on these platforms. Liquidity can be a significant problem as the ones who want to get out or in of SafeMoon quickly needs to pay a 10% charge. 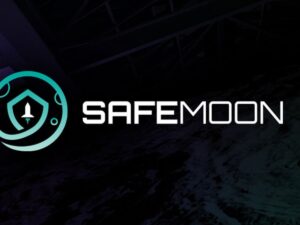 Here it is if you are looking for any price prediction of SafeMoon.

The predictions regarding cryptocurrencies are made based on algorithms that might go wrong. Because in such a volatile market, it’s difficult to predict what a token or coin’s price will be in a few hours, then how can you imagine getting accurate predictions for the long term?

It has not been a long time since SafeMoon was launched. But in this shorter period, several criticisms and legal issues have also been related to SafeMoon. So, let us know about them.

The first version of SafeMoon, in May 2021, was audited by the security auditing firm CertiK. They identified that the project’s owner has ‘control over tokens funded by SafeMoon’s seller fee.’ Because of this significant issue, a lot of things were affected.

Parallels to a meme coin

In May 2021, SafeMoon was described pejoratively as a meme coin alongside Shiba INU and Dogecoin.

SafeMoon’s developers have been described as having ‘little proof of previous success. Financial experts describe the token as ‘the furthest thing from safe.’

Comparison with the Ponzi scheme

In April 2021, the price of the SafeMoon tokens increased by 12x in a single week; people likened it to a pyramid scheme or Ponzi scheme.

Approximately a 10% sell tax is utilized by Safemoon’s token economics, which means that for a $1000 sale, you as an investor will be charged about $100. Critics also argue that this discourages investors as they face losses when selling it.

In April 2022, some pieces of evidence were founded by Findeisen regarding the liquidity wallet of SafeMoon moving to the ‘Gabe (6abe) wallet’, a wallet dubbed which withdrew funds to another company run by John Karoly.

Is it safe to buy SafeMoon?

Like other cryptocurrencies, investing in SafeMoon is quite risky. This long-term investment requires an investor who has the nerve to accept losses in the short term.

No one can say that buying SafeMoon is extremely safe or unsafe because we are unaware of what will happen in the coming future. So, if you are willing to take the risk, you can, or else you can find several other more innovative ways to invest your money.

SafeMoon works on smart contracts, and the whole process involves a transaction fee of 10%, reflections, liquidity pool acquisition, token burn, and growth fund. To buy SafeMoon, you need to download the free SafeMoon wallet for your iOS or android. Then you need to purchase BNB; you can purchase it through the wallet. Later, it would help if you swapped your BMB token to get a SafeMoon token.

The plans of the company consist of a full-fledged plan for a year which has several things lined such as doubling the size of the team, focusing on marketing campaigns, and setting up an office in Ireland/ U.K. They also aim to set up an app for SafeMoon and open an office which is African-based.

SafeMoon has been very famous since the time it was launched. The reasons are several but what matters is that you should have valid and complete information regarding the purchase of SafeMoon tokens, or else you might face problems.

Critics say that not enough information is provided to the investors on SafeMoon which confuses them. But if you see the stats of SafeMoon, you might find that it is not a bad investment as it is new but then too it’s competing with 21,000 other coins but you can’t call this a very good investment either.

The hype of SafeMoon has dropped, but it is still up from the initial token launch. Investing in SafeMoon is entirely speculative, so you should either avoid investing in it or, if you are investing, then invest less amount and also be mentally prepared for all kinds of ups and downs. Because the crypto market is highly volatile, it’s better to be prepared than to crib later.

Tags: A Beginners Guide to this cryptocurrency, What is SafeMoon?

3 thoughts on “What is SafeMoon? A Beginners Guide to this cryptocurrency”