Blockchain is also known as distributed ledger technology (DLT). It is a revolutionary technology that helps preserve any digital asset’s transaction records. DLT is widely used to mine cryptocurrencies or virtual currencies like Bitcoin, Altcoin, crypto tokens, etc. It offers high levels of security and protection for digital assets and makes online transactions safe and reliable.

Today distributed ledger technology is one of the high-demand technology in the market. Sectors like healthcare, payment, and cyber security highly rely on the DLT for its security standard. Today, one of our society’s most valued fundamental tools, money, is facing a massive change. And online money transactions have put traditional money managing authorities into a challenging situation.

Now, you do not need to visit the bank to apply for a loan or visit a store for shopping, and you can do all these sitting at your place and using your device or computer to do simple money transactions for your work. In addition, DLT also allows decentralized virtual currency for buying, selling, or making payments, similar to traditional money. This use of digital money has raised the question of the future of money. And today, we will discuss what Blockchain is. And whether it can change the course of the digital economy.

Also Read : What is SafeMoon? A Beginners Guide to this cryptocurrency

Regarding the changing future of money, many people have become curious about distributed ledger technology or block that enables the online method to preserve the transaction history of digital assets like cryptocurrencies or other digital assets. Therefore, if you want to know how DLT can change the future of money, you must know what it is and how it works for better understanding.

There is no clear definition of Blockchain; its working method, benefits, and functionality can describe what it is. Blockchain is a distributed ledger technology that works with decentralization and cryptography methods for recording transactions of digital assets. The record is accessible to every user within the network but is immutable. So, it cannot be changed or manipulated by anyone, including the operators. 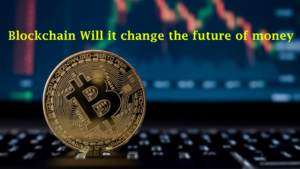 How does it work?

Blockchain or distributed ledger technology uses decentralization and cryptography to develop a ledger that records every transaction detail of a digital asset. By its name, you can understand that it uses several blocks in a chain to preserve the transaction record. Every chain has several blocks, each with three primary elements- data, nonce, and hash.

Data is present in the block; a nonce is a whole number, randomly generated when a block is created and then connected with the header hash of the block. Hash is a number or digit tied with a nonce.

So, when the first block of a chain is developed, a nonce generates a cryptographic random hash. The data within a block is signed forever and tied with the nonce and hash until it is mined.

Also Read :  What is blockchain? How does it work?

Miner in a blockchain

A miner in a DLT chain creates a new block that can be added to the chain. The method of developing a block is called mining, and people who develop the block are known as miners.

A block in a specific chain has its unique nonce and hash, but it also refers to the previous block’s nonce and hash to maintain the chain network of the blocks.

Creating a block is a complex task; miners must solve highly complex mathematical problems to find the right nonce-hash combination, also known as the golden nonce. The job is very challenging as there are only 32 bites nonce for 256 hashes which can usually generate a maximum of four million possible nonce-hash combinations. It is why miners use advanced software to find the correct nonce for mining.

Since finding a golden nonce is highly complex work, and miners require extensive computing skills and time to develop one. And when a miner finds the golden nonce and adds their block to the existing chain, they get a financial reward. For instance, a bitcoin miner gets 6.32 bitcoins for mining a bitcoin.

Another interesting fact about blockchains is that re-mining or making a change in an existing block is next to impossible because when you try to change data in an existing block, you need to modify all the connecting blocks within a chain, which makes it extremely difficult to re-mining a block. It also prevents tampering or manipulation and offers high-security standards.

Decentralization is the inevitable and crucial concept connected with blockchains. It cannot be owned or controlled by any organization or computer system. They have distributed ledgers connected with the chain via nodes. Blockchain nodes are systems or devices that contain copies of the chain and help in the functionality of the network or chain.

Every node has its different copy of the chain, and when a new block is mined, it requires algorithmically by the network to be updated, verified, and trusted in the chain. Blockchains are transparent, and every update in the chain is easily viewed by the nodes present in the network. It helps to build innate DLT security. Every user or participant within the web is provided with a unique alphanumeric identification number to verify and limit access within the network. This number displays their transaction records without revealing the identity of the participant. This combination of a system for check-in-and-balance with public information helps to retain the integrity of DLT and keep it outside the domain of any regulatory authority, as no one outside the network can view the transaction detail.

Must Read : 10 Best Cryptocurrencies to Invest In 2022

Therefore, blockchains can be counted as a method of upscaling security using technology that helps decentralize any transaction’s regulation from any regulatory body. For example, when you use cryptocurrency to purchase any good or service, you do not require regulatory authorities like banks or other financial organizations to complete the task. You can transfer it (cryptocurrency or virtual money) to others to get the facility.

The most popular yet controversial application of blockchains is a cryptocurrency or digital money. It is also a significant reason many people suspect that blockchains can change the future of money. And you need to understand some basic concepts like cryptocurrency and its connection with the traditional money system to understand how Blockchain can change the digital economy.

Cryptocurrencies are digital or virtual currencies like Bitcoin, Litecoin, Altcoins, Ethereum, etc. They can be used similarly as physical currencies to buy goods, assets, and services and make payments. You can buy anything with cryptocurrencies, from food to real estate property. But there is a primary difference between traditional currency and cryptocurrency that makes them similar to conventional money but not identical.

But interestingly, any cryptocurrency like Bitcoin, for instance, can be called both Blockchains and cryptocurrency alternatively, but they remain as two different identities. The first one means bitcoin blockchain refers only to the technology used to create the bitcoin, but the second one, bitcoin cryptocurrency refers directly to the digital currency.

Many confuse Blockchain and bitcoins and use them synonymously, but they are not the same. Blockchains are used to develop bitcoin and other decentralized digital currencies to make an alternative money or cash transaction public ledger that is transparent and immutable, providing secure and safe transactions of digital wealth.

Blockchain technology is crucial for the fast-growing digital economy of current times. Here we will discuss the benefits of using this technology.

People usually rely on third-party verification by certain authorities for monetary transactions, which may incur additional processing charges. But cryptocurrencies like bitcoin that use distributed ledger technology do not have any central control, which reduces transaction charges to a great extent.

The accuracy of Blockchain technology is the primary reason for its use in the digital economy. A transaction on this technology needs approval from a network of thousands of computers which cuts any chance of human interference (and error) in the verification process. Also, a computational error is nearly impossible in this technology as such errors need to be repeated by 51% of computers of the chain to affect the whole chain.

Monetary transactions that depend on a centralized authority take many days to complete. Banks and other financial institutions function only on working days, but transactions through Blockchain can happen anytime as it is functional 24×7. Transactions on this technology take a minimum of 10 minutes, and the transactions are also secure.

Transparency is the most exciting feature of this technology. Most Blockchains, as open-source software, display codes to every viewer and can be reviewed and upgraded by anyone. As no authority can control bitcoin codes, approval from most network users is enough to update Bitcoins. So, if anyone suggests an update that most users agree on, they can upgrade bitcoins. 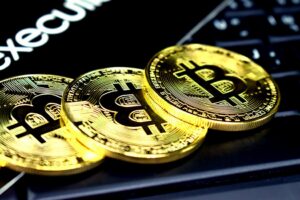 When the Blockchain records a transaction, the whole network of computers in the chain begins its verification process. Every block contains a unique hash code, and so does the previous block. Even when the hash code of a block is changed (for the verification process), the hash of the block before it remains unchanged and cannot be changed without notice.

Another primary reason experts think Blockchain can change the future of money is the recent trend or changes in the digital cash or cryptocurrency market. Many financial and digital currency experts predicted that cryptocurrencies like bitcoins (developed through revolutionary blockchain mining) tend to take over the traditional money market.

The experts assume that in the upcoming 3-5 years, people will be able to witness retail stores, online shopping, and other sectors accepting bitcoins or other crypto tokens for payment. They also believed that within one or two years, the world would see a massive adaption of cryptocurrencies and use it as a fundamental tool for investors to prevent the inflation rate. It can also be likely to become a significant alternative to gold investment. They used the data of the last few years’ growths of cryptocurrencies. And estimation of cryptocurrency at the current time is around 2 trillion USD. Also, Bitcoin is the highest-value digital currency with an esteemed value of 31,187 USD. Still, bitcoin and other cryptocurrency investments remain volatile as in the past.

De-fi is a global phenomenon attracting financial institutions holding 0.08% of the asset value. Also, the hedge fund is likely to save about 7% of their asset in the crypto market. Recently many government authorities have opened their doors and implemented different regulations to incorporate Blockchain-driven cryptocurrencies. Almost 83 countries are experimenting with crypto, while China has restricted any crypto mining or usage within its territory.

Blockchain is also known as distributed ledger technology. It is primarily used to create a ledger that records all transaction history of a digital asset. Today, cryptocurrency is the most popular and high-in-demand application of DLT or blockchains that have enormously transformed the traditional concept of money. The increasing adaption of cryptocurrencies like bitcoin (created through blockchain mining) has paved a new path for virtual or digital money and challenged the traditional, centralized currency system. Digital currencies are an advanced form of money with higher security and trust.

6 thoughts on “What is Blockchain? Will it change the future of money?”